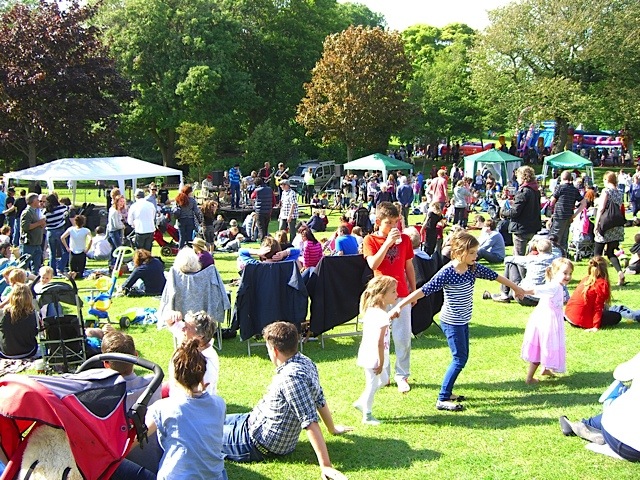 A number of years ago, after countless years of tutting and grumbling, I (eventually) decided that the trick to really enjoying the great British summer was to take every day for what is it is. Don’t waste a second wishing for the weather to be anything other than what you find on any given day- after all, non of us can change it. I think it’s called ‘living in the moment’.

Most of the time, this approach seems to serve me rather well and it even feels quite liberating to be free of the annual expectations and disappointments. Unfortunately, this this Zen-like approach goes right out the window when you find yourself as one member of a committee planning an outdoor summer event like Picnic in the Park. The prospect of rain then becomes not simply ‘one of those things’, more a minor disaster.

And so, as Sunday 24th June approached we found ourselves paying much attention to the looming forecast on a daily basis, even checking different meteorological sources just in case the first one had somehow got it all wrong. The months of planning, the phone calls and emails, the booking of acts, the hiring of equipment, the handing over of money -all started to feel a bit like one big punt. Luckily, we at Friends of Queens Park like a flutter and all feel it’s a punt worth taking.

When the big day finally arrived, frankly things weren’t looking promising. Flaming June wasn’t in a good mood at 9.00am and she wasn’t keeping it to herself. Putting up a gazebo in a stiff wind always threatens to become a You’ve Been Framed moment but perseverance and optimism (blind) were in evidence all around as people arrived to set up their stalls and the stage. ‘It’s supposed to get better’ I kept saying optimistically. Like a deluded parrot.

Slowly but surely, better it became. The program of entertainments started at noon with local band Outrage kicking off proceedings to a gathering crowd. Their youthful enthusiasm and energy was infectious and i’m sure I could feel it spreading round the park. The brave decided an ice cream was the defiant thing to do. The sleepy opted for the kick of fresh coffee. The comedians chose a cup of Pimms. The comfort lovers tucked into cake. The foodies sampled exotic and traditional offerings from around the world. Al Start got the kids singing and the rest of us smiling. Then, just when everyone had all but forgotten June and and her huffy ways, the sky changed from from a moody grey to a fetching shade of blue.

Dr Blues sang the blues but the smiles only got broader. Castles were bounced, games were played, prizes were won. The lawns filled up with families and their picnic rugs. I stopped for a minute mid-afternoon and surveyed our beautiful park. Everywhere I looked there were people, young and old, having fun. In the sunshine! At the end of the day, that was the whole point of the Picnic: a summer day for everyone to get together and enjoy together. If the key to a happy summer really is living in the moment, what a lovely moment to find yourself in.

The Friends of Queen’s Park put on Picnic in the Park every June. Rain or shine.

Here are some pictures of the day.