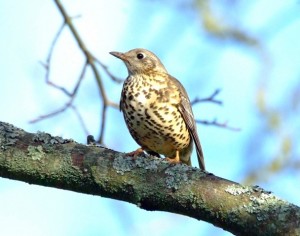 This handsome Song Thrush was photographed catching the late January sun on a lichen covered branch at the top of the Dog Exercising area.

Will it find a mate and stay on in the Park? Or will it move on as it has done in recent, years to a more thrush-friendly habitat.? It is a sad loss that Britain’s favourite song bird, celebrated by Keats and Shakespeare, is no longer a feature of Summer in Queens Park.

Also spotted in the North end of the park were bold, thrush-like Fieldfares and petite Redwing.

On a walk over snow covered Whitehawk Hill earlier in the month the sky was animated by many groups of Fieldfare heading purposefully eastwards from their native Scandinavia to the berry laden bushes of Bognor or the sun warmed slopes of Queens Park. 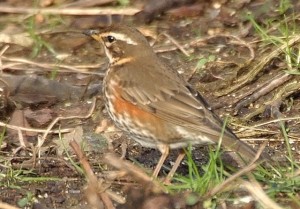 The Redwing above was beautifully camouflaged against the Wild Garden’s dead grasses. It also copied a Blackbird by taking a bath in the puddle in the old Sycamore log. 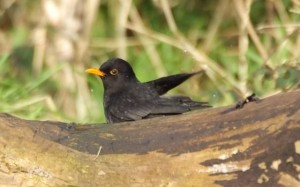 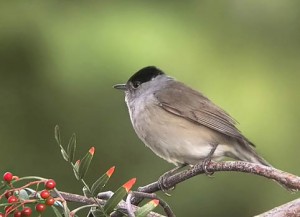 In mid February a Blackcap announced it’s arrival in the Wild Garden; it’s soft, rapid warble from the shelter of tall bushes; a foretaste of Spring.

March will see the arrival of many more little brown birds. One of them, the Chiff Chaff, sometimes makes quick sorties from the bushes around the pond to catch airborne insects. Later their ‘chiff-chaff’ calls will punctuate the glorious soundscape of the park.

March is also the time for our frogs to emerge from hibernation to mate and lay frogspawn in the pond and in the Cascade pools.

The Cascade has been looking a sad sight for some time. It has significant cracks in its cement structure which not only waste the natural supply of spring-water which issues from the top, but also waste pond water when it is pumped via the Cascade to turn its tons of rock into a riotous waterfall.

It has proved difficult to find suitable contractors to take on the repair of the Cascade but new ones have come forward and once an acceptable quote has been obtained the Friends of Queens Park will apply for Grant Funding for a repair.